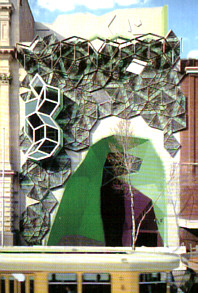 Am currently at the 2005 Radio Conference at RMIT and enjoying it rather a lot I must say.

Fascinating day yesterday thinking about micro-media, smallness, narrow-casting, communities, democracy and social conscience, sustainability, commercialisation and more. The more time I spend here and the more I think about what I’m about when it comes to social software… the more I’m starting to understand what I’m about (I think).

There is a battleground in every medium, organisation, industry and community between economic and cultural rationalism and, I don’t know quite how to put it, social philosophy(?) The free-market $decides approaches have moved on from trade to society and the very way we live our lives. In a rampant post-socialist rejigging we’re getting screwed by a religion of money and I don’t like it.

Local radio, community radio, public service radio and more just don’t fit the mould. Neither do our universities, public television broadcasters, cultural services, libraries or arts. It’s as if a stupefying ideology of materialism is becoming accepted as common sense and be damned all you who stand in front of it (unless it happens to add value to real estate in which case it’s more than welcome…)

As much as the marketplace is a conversation though, so is our political and cultural milieu and this is where social software and blogs in particular make an entrance. To hear the number of people I have heard over the last days fretting over spectrum and to listen to the evolution of spectrum and broadcast licensing over the last 100 years is to understand what a powerful thing it is that we’re playing with here.

Everyone shouldn’t necessarily have a blog (in the sense that we don’t all need (or want!) to be broadcasters) but many people and groups could benefit enormously from them. With the barriers to expression removed (to a degree) broadcast, narrowcast or blogcast is the most effective, if not the only, way we can fight the acceptance of ROI as being our key cultural driver.

I’ve got a proto-project in mind that could completely fall over or could be of some value, to give you a hint, it involves WPMU and physically situated contexts. For more of a clue roll to the bottom of this blog. Will write more about this soon.