A funny thing that’s been rattling around in my head (as these things do) is Stephen’s comment on Scott’s new blog:

“we’re still in the heady first few days of his blog where every topic is new (it gets harder in the second year, when you realize you made the same point before, somewhere)” [OLDaily]

Maybe the reason this resonates is I was, thanks to a request for some diagrams it turns out I didn’t do anyway, poking round my old Radio weblog the other day and came across a few interesting posts from 2003, see if any of them sound familiar:

But I think that that’s OK, I’m a person rather than a newspaper or publication (I guess OLDaily is more of a publication?) and we tend to repeat ourselves, go over the same ideas, contradict ourselves to the nth degree and generally make arses of ourselves… I guess where this resonates is that when I started doing this sort of stuff I was hopelessly self-conscious (still am a fair bit ;o) and I reckon that part of finding your own voice in blogging is getting over that, telling the same crummy jokes and stories over and over again, rescribbling the same diagrams and having the same conversations over and over again.. until you figure out what you’re actually talking about!

Even more amusing was a Google images search that I did on ‘blog’ a few days back, and on the first page… seen anything similar to this before :o) 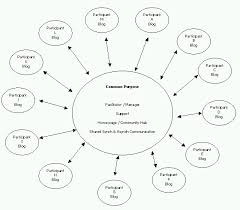